"An Evening with Haydn" at RCC 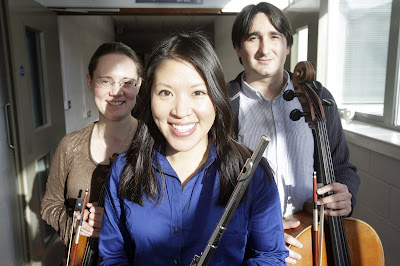 “An Evening with HAYDN”

plus pieces by Telemann and Debussy

The Regional Cultural Centre and the Donegal Chamber Music Society present the last performance of 2010 of the Szabó-Yélamo Concert Series at RCC.

American flute player Sabrina Hu will join Donegal based Szabó-Yélamo String Duo for “An Evening with Haydn” on Friday 26th November at 8pm.

Sabrina Hu has enjoyed an exciting performing career throughout the and in many prestigious venues. Upcoming recitals in the current season include performances throughout , , , and the She completed the Doctor of Musical Arts degree from , where she was also a Teaching Assistant. She also obtained a Masters of Music degree in performance from the Royal Northern College of Music in , and a Bachelor of Music degree in performance from the Mannes College of Music, New York City.
Sabrina is currently based in , and teaching at the National University of Ireland in Maynooth. She is also Co-Artistic director of the Walled City Music Festival.

The Szabó-Yélamo String Duo, founded in 2006, comprised Hungarian violinist Orsolya Szabó-Yélamo and Spanish cellist Víctor Yélamo, both professional musicians are extensively involved in music education across the , they are members of the ESTA (European String Teacher Association) and they do instrumental tuition with Co. Donegal Music VEC Education Partnership and at the , Magee Campus. As chamber players they perform regularly in , and

In this the very first classical music series at RCC the Szabó-Yélamo String Duo in collaboration with local and international classical players have brought to Letterkenny eclectically programmes with music from Corelli to Elgar, from Bach to Debussy. Past artists during this season had been the Donegal Chamber Orchestra, Slovakian violinist Lucia Spacirova, local Double Bass player Michael McGinty, acclaimed international concert organist Desmond Hunter and for the November concert the American flutists Sabrina Hu. For more information about future classical music concerts in Donegal please contact donegalchambermusic@gmail.com